Marcus Zusak published The Book Thief in 2005, and despite his  personal misgivings, was an instant success.  It is a story of ordinary people trying to survive under extraordinary conditions, and a girl who loved books.

It is also a mournful story, and not one that you can simply close the cover and walk away from, it follows you.  It seeks answers to thorny questions – it forces uncomfortable responses.

What is immediately clear is Marcus Zusak is a sensitive writer.  His idea for the book began in Zusak’s childhood – his parents of Austrian-German descent grew up under Nazi rule.  They told their stories to their children around the kitchen table.  Zusak remembered those stories, and they became the soil in which The Book Thief grew.  (Random House, 2009) (Book photo, Amazon.com).

Zusak provides a surprise on the first page –we meet the narrator — Death.  Not the arrogant Death of John Donne, or Milton’s incestuous Death, or even a specter with sickle.   Zusak’s Death is sympathetic, beyond this, there is something more, it is in his voice, he cares. 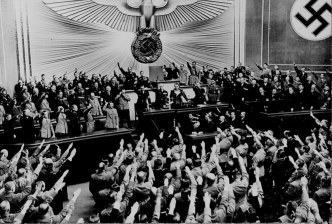 Death is the observer throughout the life of the main character, 10-year-old orphaned Liesel Meminger, her foster family and their village.

Liesel is the real book thief and her first theft occurs when she deftly pockets a fallen book at her brother’s grave, it is a copy of the Gravediggers Handbook. While watching this petty theft, Death’s interest in Liesel is piqued. It is Liesel’s first, but not last, theft of a book.  When she stole the book, Liesel did not even know what it was about, because she could not read. (National Archives. (Photo Description: World War II Photos | National Archives).

Liesel arrives in Molching, a fictional German village not far from Dachau and the setting of the novel. Both Liesel’s mother and father have been deported, and Liesel is left in the care of foster parents, Hans and Rosa Hubermann. A cast of characters appear, loving Rudy the next-door neighbor, and Max Vandenburg, a Jew seeking refuge in the Hubermann basement.   Ultimately, it is Hans’ patient tutoring and encouragement that teaches Liesel how to read using the Gravedigger’s Handbook as a primer.  At once, Liesel’s love of reading takes over her life and her desire for more books overtake caution.

In one instance, Liesel risks her life and the lives of her foster parents when she boldly removes a still smoldering book from a pile of burned books in Molching’s square.  Had she been caught, the possible punishment was deportation and death, not just for her, but Max and the Hubermanns as well.

Yet in spite of the ever-present danger surrounding her, Liesel continues her search for ever more books, all the while blithely ignoring the risk of being caught.  The danger and fear of everyone increase along with threat of more Allied bombings.

Zusak drew this tale from ordinary people’s real experiences living under Hitler’s rule.   It was the ordinary people who hid, fed and clothed frightened Jews in their homes, in basements, attics, and whenever possible, somehow, managed to keep their precious books safe.

Yet, the story of Liesel’s is not an isolated one, there are many real-life stories that have not been told.  What we do know, thanks to Antonio Iturbe, is the story of  The Librarian of Auschwitz.  Dita Kraus, was the actual Librarian of Auschwitz.  At 14-years of age, Kraus risked her life to protect a scanty library – a collection of tattered and disintegrating books – mere pages—so that there could be a type of school for the children of Auschwitz. It was their only opportunity to learn and so they might hear a story before they too disappeared.

Other European Jews, while fleeing for their lives, managed to find the means to protect and preserve their books. In Aaron Lansky’s Outwitting History: The Amazing Adventures of a Man Who Rescued a Million Yiddish Books (2004), hundreds of people did just that, and in doing so, preserved their history and saved a dying language, Yiddish.

Lansky spent over 25 years searching for Yiddish books and in the end, he found a million.  Before WWII, Yiddish was the common language among European Jews. The books stood as the record of their history, their lives, and their language.

When Jews were forced to abandon the only countries they had ever known, these books were what kept them together. Knowing they might never return they took their books and in doing so, saved their culture and their language.

While Liesel may be a fictional character, the time and events in which Liesel lived were real.  Of the many others who took great risks to save their books, we may never know, but we can acknowledge their sacrifices and be grateful for the books they saved.

The hard question is, if pressed would we do the same?

Interview with Markus Zusak, author of The Book Thief  Random House Kids Published on May 1, 2009 https://www.youtube.com/watch?v=m7B8ioiZz7M

A former paralegal, Renee Kimball has a master’s degree in criminal justice. Among her interests are reading and writing. She is an active Animal Advocate and foster for homeless animals.   END_OF_DOCUMENT_TOKEN_TO_BE_REPLACED

This is your very first post. Click the Edit link to modify or delete it, or start a new post. If you like, use this post to tell readers why you started this blog and what you plan to do with it.